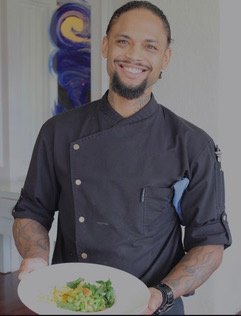 Dominique Shelton was raised in Florida. Born as an identical twin as well as oldest of six siblings, some of his favorite childhood memories were spent around the kitchen table. Weekends were spent shopping at the local farmers markets and his mother, being a gourmet cook, loved to introduce the family to new ingredients and recipes. The dinner table was where everyone reunited day after day, jokes and laughter surrounding the table. This is where some of Shelton’s fondest memories and life lessons were learned. As a young adult, he began to work with his father who is a general contractor and began to enjoy working with his hands and creating. Although the work by nature could be grueling, he found that an enjoyable aspect of the creative process – a sense of accomplishment.

Preparing to go to college, Shelton began his first restaurant job in the fast-food industry. His competitive personality thrived off the pace of short order cooking and while attending school, Shelton kept a cooking job. In each of his tenures he was promoted to a leadership position. Realizing his enjoyment and developing a passion for the industry, he decided to move to Los Angeles to experience professional kitchens.

Starting with Cleo in Hollywood, Shelton cut his teeth under Chef Danny Elmaleh’s brand-new Mediterranean concept. Eager to continue to learn, he ventured to Pasadena to work at AKA Bistro and Bistro 45. Training under Chefs Steven Lona and Charley Houegban, Shelton was equipped with both French and American techniques. Desiring hotel experience, he then joined the Royce Wood-Fired Steakhouse at the Langham Huntington under Chef Perry Pollaci. In 2017, he took over as CDC of the Royce Wood-Fired Steakhouse and as the 2020 pandemic led to many fateful closures across the industry, he spent his free time volunteering at local food banks. From there, he was recalled to the Langham and assisted Executive Chef Denis Depoitre as the Banquet Chef of the property.