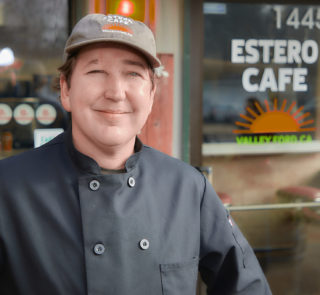 Chef owner Ryan Ramey learned to cook from his mom who taught him how to maintain a garden and cook all their meals.  He began studying culinary arts during high school at the SRJC. From there, Ryan went on to work at the Petaluma Sheraton where he received much of his banquet experience and guidance. He then moved to San Diego to become the Executive Chef of The Turquoise Cafe Bar Europa where he managed two farm to table restaurants along with their own 2 acre farm.  Ryan is passionate about farming and sustainability and has raised pork for the Estero Cafe. He works with our local farmers to arrange his kitchen scraps be picked up and used as tasty treats for chickens and pigs. In addition to cooking and farming he is an avid surfer, scuba and free diver, spear fisherman, and mushroom forager.