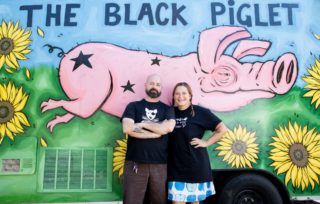 Duskie Estes & John Stewart are the co-chefs + farmers behind Black Pig Meat Co. and Zazu Catering+Farm. They received the Rising Star Chef Awards for Sustainability and both their restaurant (lost in the Russian River floods of 2019) and their food truck (still truckin’!), The Black Piglet, received Slow Food Snail Awards.  ZAZU was named a TOP 10 best new restaurant and was listed for multiple years in the San Francisco Chronicle’s TOP 100 restaurants. It was included in the San Francisco Michelin Guide for over a decade and rated TOP 50 restaurants in the Bay Area by San Francisco Magazine.  On their farm, they raise rabbits, chickens, ducks, sheep, pigs, and goats.

Duskie began cooking at the age of five in her EZ-Bake oven. She is a graduate of Brown University. Growing up in San Francisco, she fell in love with everything restaurant through her weekly Wednesday night dinners out with her father. Duskie is known for being a fierce competitor on Food Network’s The Next Iron Chef, seasons 3 & 5 and for judging on Guy’s Grocery Games. zazu kitchen + farm was also featured on Food Network’s Diners, Drive-Ins, & Dives. Duskie and John moved to Sonoma County from Seattle where Duskie’s was the chef of Palace Kitchen in Seattle, where she was voted City Search’s Seattle Best Chef in 2000. Under her leadership, Palace Kitchen was rated by Gourmet magazine as one of the top twenty restaurants in the country in 2000. She was coauthor on Tom Douglas’s Seattle Kitchen, which received the James Beard Award in 2001.

John Stewart is from Mt. Kisco, New York and grew up in the kitchen of his family’s four generation catering company, Thomas Fox and Sons, founded in 1919 by his great grandfather. He is a 1990 graduate of the University of Colorado at Boulder. John is an avid salumist studying at the University of Iowa Meat Lab.