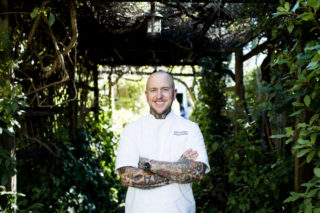 Chef Cole Dickinson is executive chef at MacArthur Place, where he oversees all food and beverage operations for Layla, The Bar at MacArthur, The Porch, weddings and social events, poolside dining, and the hotel’s in-room dining program.

Chef Cole joins MacArthur Place from Acacia House at the Forbes 4-star Las Alcobas Resort in Napa Valley, which was recently named one of the Bay Area’s best 100 restaurants by the San Francisco Chronicle.  He brings a vibrant culinary pedigree to Sonoma, having worked for years as a protégée of Chef Michael Voltaggio, first at Charlie Palmer’s Dry Creek Kitchen in Healdsburg, followed by Voltaggio’s Hemisphere at the Greenbrier in West Virginia and then at The Bazaar by José Andrés in Beverly Hills. He was named executive chef at the Voltaggio Brothers Steak House and helped to oversee the kitchen at Michael Voltaggio’s wildly successful ink, named a GQ magazine “Best New Restaurant in the US” in 2012, as chef de cuisine.

His professional experience also includes work with some of the world’s most highly lauded chefs and restaurants such as Heston Blumenthal’s Fat Duck in London; Laurent Gras’ 3 Michelin star l2o in Chicago and with Wolfgang Puck in Hollywood. Dickinson has competed in and won Food Network’s ‘Chopped’ and has been recognized as a StarChefs ‘Los Angeles Rising Star Chef,’ an Eater ‘Young Guns’ winner, and has also been named one of Zagat’s ’30 Under 30.’